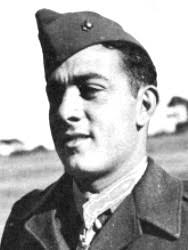 John Basilone started his military service as a part of the US Army stationed in the Philippines. When World War II began, he wanted to be a part of the action and figured the fastest way of doing so was to join the Marine Corps, which he did in 1940. He led the Dog Company, 1st Battalion, 7thMarine Regiment, 1st Marine Division when the US invaded Guadalcanal, the first amphibious landings of the war. During the Battle for Henderson Field, an airfield, Basilone was in charge of 2 sections of machine gun consisting of only 15 men and 4 heavy machine guns. Amid torrents of tropical rain, Basilone and his men endured attacks almost non-stop for two days. The fighting ceased at sunrise and “For extraordinary heroism and conspicuous gallantry in action against enemy Japanese forces, above and beyond the call of duty”, Basilone was awarded the Medal of Honor. The citation further states that his selfless efforts contributed “in large measure to the virtual annihilation of a Japanese regiment” ~ this the equivalent of about 3,000 enemy soldiers.After his time at Guadalcanal, Basilone returned stateside to do a War Bond Tour, but desired heavily to return to action. He turned down a commission as an officer and then an assignment as an instructor before his superiors finally allowed him to return to the Pacific. He was assigned to Charlie Company for the invasion of Iwo Jima. It is here, entering with the 1st wave of Marines on February 19, 1945, while working his way up an airfield while continuously under attack, that he was hit by mortar shrapnel and died. His actions at Iwo Jima helped the Marines get off the beach, and for these heroic efforts, he was posthumously awarded the Navy Cross.John Basilone is the only man to receive both the Medal of Honor and the Navy Cross for actions in combat during World War II. His niece states in her documentary, “On Guadalcanal, he’d become a hero. But returning to the war in Iwo Jima made him a legend.”