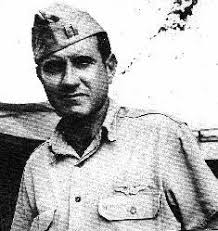 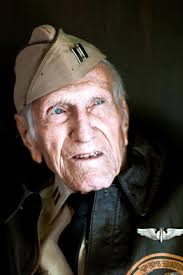 2nd Lieutenant Louis Zamperini United States Army Air Corps – In May 1943, Zamperini was serving as the bombardier on a B-24 that was searching for a missing plane when his own aircraft developed mechanical problems and went down in the Pacific. Only Zamperini, the pilot, Russell Allen Phillips, and tail gunner, Francis McNamara survived the crash. The 3 men stayed alive in their small raft by drinking rainwater and eating the occasional seabirds and fish they were able to catch, all while facing strafing from Japanese bombers and the ever-present threat of shark attacks. After a month at sea, McNamara died. On the 47th day in the raft, Zamperini and Phillips, having drifted some 2,000 miles since the crash,   were picked up and taken prisoners of war by the Japanese.   They spent more than 2 years in a series of prison camps where Zamperini, a former Olympic runner, specifically was singled out for abuse and vicious torture by one camp sergeant nicknamed “The Bird”.   The defiant American managed to survive and was released after the war ended in 1945. Zamperini credits his athletic training in helping him withstand the torment. He died July 2, 2014.