Chief of Staff, General George Marshall wrote in a final report on a little known unit in World War II that became known as Merrill’s Marauders, “In the thick of battle the soldier is busy doing his job. He has the knowledge and confidence that his job is part of a unified plan to defeat the enemy, but he does not have time to survey a campaign from a fox hole. If he should be wounded and removed behind the lines, he may have enve less opportunity to learn what place he and his unit had in the larger fight.”These words best describe a military unit and action that took place at the end of WWII where a unit of just 3,000 men were assemble to eradicate the Japanese, their supply and communication lines, from the country then known as Burma.The Marauders were foot soldiers who marched and fought through the dense and almost impenetrable jungles of Burma. The unit was made up of 3,000 volunteers selected based upon “a high state of physical ruggedness and stamina” considering the mission and landscape they would face cut off from normal supply lines and facing unusually harsh conditions.To prepare, calisthenics and marching with packs were done every day with increased intensity and duration to condition the men to be “physically hard”. Their mission started with a month long 1,000 mile trip by train and boat with the last 100 miles marched in 10 days on foot carrying their gear. The mission was intense in not only the fighting engagements with the enemy but the arduous conditions of marching in the rugged jungle mountain terrain. Battle casualties were experienced from fighting the enemy, but equally challenging to the mission were the disease casualties coupled with the sheer exhaustion from the physical demands of this mission.In the end, this mission would not have been successful without the resilient support that each soldier provided toward one another as a unit. This mission, while not reported as much as other stories to come from WWII and perhaps not viewed as important in the overall campaigns we most know about, was important to these men. Regardless of whatever the importance of the mission may have been at the time or considered today, these 3,000 young men went into this fight as a unit believing that the fight in front of them meant everything to the larger mission. They traversed over 750 miles of jungle terrain, more than any other US Army unit in WWII. Each soldier in the unit received the Bronze Star and the unit was awarded the Distinguished Unit Citation.The legacy of Merrill’s Marauders lives on today as the 75th Ranger Regiment is a descendant of this original unit. 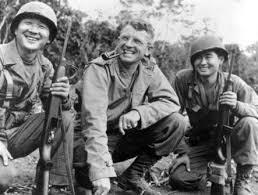