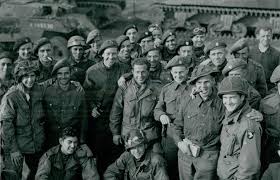 Company E 2nd Battalion 506th (otherwise known as Easy Company) formed on July 1, 1942 at Camp Toccoa, GA becoming the 1st parachute Infantry regiment to complete basic training and parachute training as a unit. Easy Company, with 140 men in its ranks, entered the war on June 6th 1944 with the invasion of Normandy. After their jump into France, they performed a key task during D-Day by eliminating 4 German 105mm cannons aimed at Utah Beach. From there, they went on to fight in Holland in what was known as Operation Market-Garden to secure bridges over major water obstacles, with the crown jewel bridge being that over the Rhine River into Germany. Next, they held the line while completely being surrounded by Germans and with minimal winter clothing and scarce ammunition and supplies in Bastogne, in what is known as the Battle of the Bulge. They continued by being put into the lines at Hagenau, and after there, they were moved to France, where they were finally able to shower, have hot meals and sleep on cots. It is during this time that they were awarded the Presidential Distinguished Unit Citation, which was the first time in Army History awarded to an entire division.They ended with securing Hitler’s Eagles Nest in Berchtesgarden. By the end, 48 who served in easy throughout the war lost their lives. More than 100 of the men were wounded, some more than once.Their battle cry stemming from their days at Camp Toccoa was “Currahee!” which means “stand alone”, but not one man stood alone; they stood together as one.